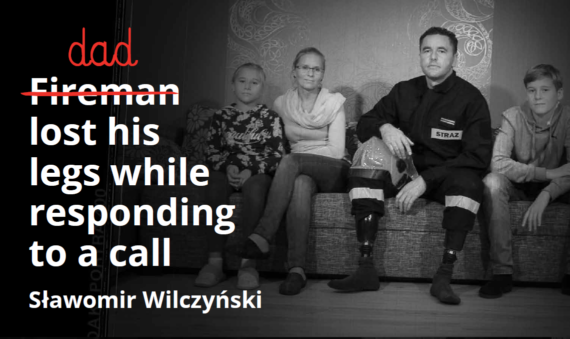 On 17 March 2011, the fire service received a call: a human being needs to be saved. They started their sirens and went. However, they never got to the victim – the car they were riding was in a head-on collision with a lorry whose driver did not make way for an emergency vehicle.  His friends tried to get him out of the damaged cabin… Sławomir Wilczyński woke up in the hospital.  Without his legs. He cried for the first time in his adult life.

“Jesus, I was so happy. I wanted to be on that job so much. Even when I was on holidays, I would miss my work at the end. If I could, I would return”*, he said.

After the accident, he was visited by a man whom he had saved a few years before from a helicopter crash. He survived but he lost his leg. He came and he gave him hope: you can live with it. And he was right.

Sławek still considers himself a fireman. He thinks that he needs to return the good he got from people after his accident. He supports amputees and people who suffer from spinal injuries. He helps train rescuers who go on foreign missions. He plays wheelchair basketball, runs on special prosthetics, gives hope to those who do not believe yet that a life with a disability can be a 100 percent or even more life.

His children Olek and Karolina say that they are proud of their dad. “Because he is with us. He did not break down”.

*The quote comes from the book “To be mature enough for death” by Magdalena and Maksymilian Rigamonti.