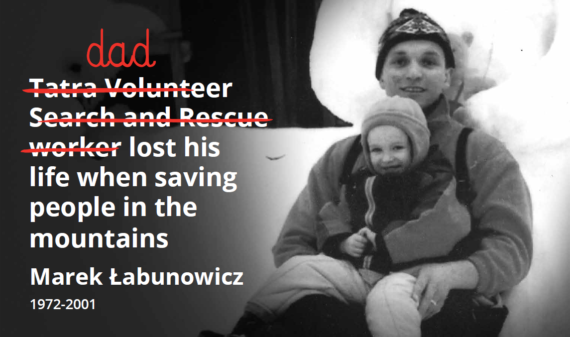 A scout, a musician, a Tatra Volunteer Search and Rescue worker – this inscription on the tomb in the na Pęksowym Brzyzku cemetery in Zakopane does not fully reflect the extraordinary life dynamics which characterized Marek Łabunowicz. Despite living only until 29, he became an icon of the region, a role model for the young and a pride to older Highlanders. He was everywhere since his youngest years. The school, the church, the scouts, sports clubs, cross-country and Alpine skiing, mountain races, climbing, speleological club, etc.  Nearly every important institution and community knew Maja, as that was his nickname.

He was everywhere and he was open to everyone. He was remembered as a very cheerful and always smiling boy, most often carrying a musical instrument.  Apart from his personality features, he got a special gift from God – absolute pitch and extraordinary manual skills.  Whatever he touched, it played in his hands. The violin, the piano, the guitar, the pipe, the organ are just the most popular instruments he played.  However, he was made famous by the fact that he brought the skill of playing the Hungarian dulcimer to Podhale and was a true expert in it.

He used to play with Edyta Geppert, the Golec brothers, Piotr Majerczyk, Jerzy Bek, Zbigniew Namysłowski, Maryla Rodowicz and many other well-known musicians and share his talent with the younger generation of Podhale’s community.  Fascinated by highlander music, he taught group and individual violin lessons, often riding his bicycle in the rain into the inaccessible regions of Podhale.

He lived the full highland life. He did not lose time for sleep. He shared and spread his happiness onto everyone he met. Everything he did was like service: the scouting service, the church service, he served by teaching the violin and working as a rescuer for the Tatra Volunteer Search and Rescue. On 30 December 2001 he went to help victims of an avalanche together with his Tatra Volunteer Search and Rescue team. It was his last rescue mission. Marek Maja Łabunowicz and his colleague died in another avalanche on the Szpiglasowa Przełęcz in the Polish Tatras.

Marek left a wife and a daughter.  Hania was four years old at the time. Today, she studies ethnology and cultural anthropology at the Jagiellonian University.  Earlier, she graduated from Zakopane’s Plastic Arts High School, majoring in the lute. Just like her dad, she is fascinated by the culture of Podhale Highlanders, plays, sings, dances and makes musical instruments. Although she regrets that she knew him for such a short time, Hania is happy to have had such an extraordinary father and Marek is definitely proud of his daughter as he can be sure that “he did not wholly die” thanks to her.